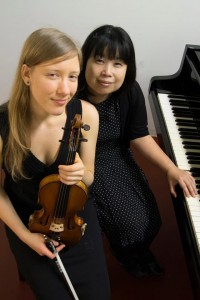 Susanja Nielsen was born in Randers, Denmark. She started playing the violin at the age of 7, and at 14 she became a Jungstudent at the Hochschule für Musik und Teater in Münster, Germany.

She began her studies at Edsberg Slott in Stockholm, and continued with a Diploma and Master of Music from the Hochschule für Musik “Hanns Eisler” in Berlin with Prof. Ulf Wallin, graduating with highest distinction. She is currently studying Concertmusicus at the Royal Conservatory in Brussels with Prof. Sebestyen. Since her first solo performance with orchestra at the age of 8 she has performed regularly with orchestras in Denmark, Sweden, America and Germany. She is prizewinner of several competitions, and as an eager chamber musician she performs regularly on both violin and viola in various ensembles in Germany, Spain, Italy and Denmark.

She graduated her Bachelor and Master of Music from the Elisabeth Music University in Hiroshima, both with the highest distinctions.

She is prizewinner in several competitions in Japan, Italy, UK, Portugal and Austria, and is a sought-after soloist and chamber musician who performs extensively all over Europe and Asia.